A few weeks ago I was doing a photoshoot outside for the first time in a while. I’ve almost exclusively been doing studio work for about the last year or so and I noticed some big differences when I went to go shoot outside again.

When I’m in the studio I’m usually trying to keep my camera between f/11 and f/22 to keep things nice and sharp. It shows in the final image especially with a 60D which doesn’t really have too many other scenarios where it can really shine. I’ve been getting so used to seeing images that are nothing but crisp front to back that it was kind of jarring shooting outside at f/4-f/5.6 again. Focus was noticeably less sharp on some but not all photos, making me a little uneasy but that’s of course to be expected given such a wide lens opening and the many other factors of outdoor shooting.

One of my big pet peeves with shooting outside is that I have to account for potential blurriness. In the studio you can keep your shutterspeed around 1/250th or even 1/125th of a second and still rarely encounter blurriness because the flash is what is freezing the action if there is any type of movement at all. Also, unless you bring a reflector, or some flash units with you, you’re at the mercy of mother nature. As I’ve been shooting in the studio I’ve really been enjoying all the control I have with lighting to create a specific look, feel or mood. Outside I find there are the two extremes of super flat, soft light from a cloudy day, or the ultra-contrasty-racoon-eye sunny days. There are a few in between situations but that’s generally what you’re dealing with.

More recently, I found that there’s also another factor that contributes to the sharpness, or rather the unsharpness of outdoor photos given the low f/numbers needed to create an exposure. Most big lens manufacturers like Canon, Nikon and Sigma have created a chart that represents what’s called the “Modular Transfer Function” of a lens. Essentially what the chart does is it maps out the relative sharpness/resolution and contrast of a lens on a scale for a lens that is opened at its widest f/stop and then stopped down to f/8. I was surprised to find that some lenses become almost 1/2 their total sharpness/resolution quality at their widest f/stop as opposed to f/8 which is significantly better. 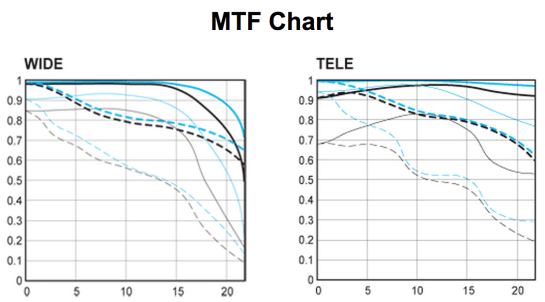 The black lines represent the lens wide open, the blue lines represent the lens stopped down. The thick lines represent contrast, and the thin lines represent sharpness/resolution. The Y axis is a 0-100% numbering system, meaning that for the wide angle of the 24-105L it is at 100% of it’s total potential sharpness/resolution and contrast. The X axis is from 0 (which here is the center of the lens) to the edge of the lens (20). Ideally, all the lines should stay grouped together in a straight line across the top of the chart. This is found more often with prime lenses at least on paper. There are many photographers and gurus on the web that will argue, given the right zooms and prime lenses, that both types of lenses are equally sharp. I think in today’s age, the difference between a zoom and a prime lens is negligible and even less so if you stop down to f/8 or higher on a zoom and on a prime lens. There are still many photographers that will only shoot their images using prime lenses. 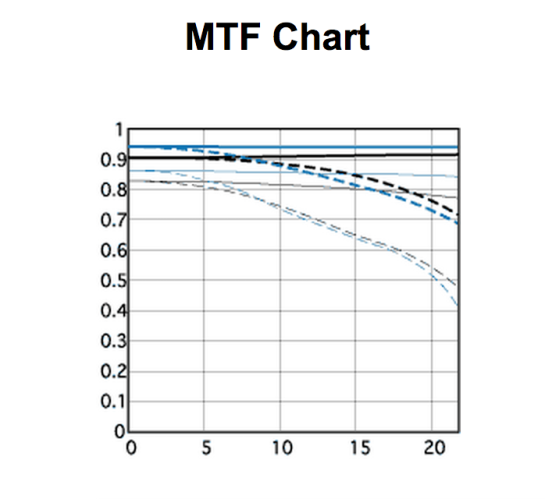 So before you think that you may have back-focused your lens while shooting and that’s why you’re getting soft images, check your lenses accompanying MTF chart on your lens manufacturer’s site. It could be that your lens is much more sharp at one f/stop down from where you’ve been shooting. For the future I will definitely be referring to the MTF charts before buying another lens.

If you need another explanation of the subject, there is a beautiful Luminous Landscape article that discusses MTF as well.

A couple days ago I went ahead and bought a Canon 24-105L lens just like the one I had rented from BorrowLenses a few weeks earlier. I’m so stoked about this.

You can debate with me all you want but this is one of the finest purchases I’ve made since I bought my 60D about a year ago. The long term plan has been to acquire an arsenal of EF lenses so as to have maximum compatibility with future camera upgrades. For those of you who don’t know or aren’t camera savvy, there are two types of sensors on DSLRs. There are the APS-C sized sensors, which stands for “Advanced Photo System type-C.” These are the sensors that are built in to most consumer grade DSLRs in the current market, my 60D has an APS-C sensor and it’s great.

There is a caveat to the APS-C sized sensor though, it results in a cropped field of view. You wouldn’t notice it really unless you did a side-by-side comparison but cropped frame sensors result in an image that is cropped in about 1.5-1.6x depending on if you’re using a Canon brand camera or a Nikon. For some types of photography this is fantastic, if I was really into wildlife/bird photography and I had a 100mm lens on my cropped frame APS-C sized sensor it would give me a zoom of about 150mm instead of 100. Great for telephoto lenses but not so much for wide shots.

The lenses that usually come with crop frame cameras are known as the EF-S lenses in Canon’s lineup. All this means is that the lens’ opening on the inside of the camera body is sized so that the entire image fits onto the small sensor. Were you to somehow fashion one of these lenses onto a full-frame camera, a camera where there is not crop factor of 1.5x or 1.6x then you would get a dark circle or vignette around your image.

So, EF-S lenses are great but it’s best, if you’re going to buy lenses, to get the EF lenses because they are sized for full-frame cameras and also have backwards compatibility to the APS-C sized camera sensors like what I currently own. I would have to think that the reason that all lenses are not made to be EF lenses largely has to do with cost as they are usually more expensive. But, of course, there’s always the 50mm 1.8 which is an EF lens for about $100 no matter where you look.

If I look at Canon’s lineup of DSLRs, the next camera worth upgrading to from a 60D would be either a 5D Mark II or a Mark III. The reason I haven’t bought one already is because until recently I only had EF-S lenses which are not compatible with Full-Frame cameras. The 24-105L is an EF lens and is also amongst some of the best optics Canon has ever made.

Personally, if I had to buy one lens and leave it on my camera forever, this would be it. I think it’s kind of silly to have to go through this extra gyration of changing out my entire lens collection in order to make upgrading to a full-frame camera viable, but I think it’s probably something a lot of budding professionals like myself have to go through at some point. It’ll be nice to have another piece of equipment that is up to my standards. Normally I’d feel bad about dropping hundreds of dollars on something like this but I know it will pay for itself a million times over.

Have yourself a lovely summer and see you next week,